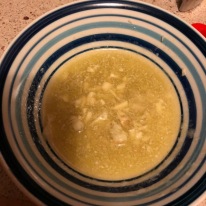 Brie. Smashed potatoes. Together. Hell yeah. The stuffed here is more like topped, but man, these are still good.

Bless Tieghan, but pretty much everything after the brie in the original recipe I omitted, because FFS, white truffle oil??

Preheat the oven to 400. Take the baby potatoes, olive oil, and sea salt and pepper, and toss them together in a small bowl (pic 1). Put them on a lined baking sheet (pic 2), and roast for about 30 minutes (original recipe recommended 20, I found it took longer) until the potatoes are fork tender.

Just before the potatoes come out, combine the melted butter, crushed garlic, and thyme in a small bowl. Using a potato masher or a fork, gently press down on the potatoes and smash them until they’re about .25 inches thick (pic 3). Drizzle the butter mixture over the potatoes (pic 4), and then roast for another 20 minutes, until golden and crisp (pic 6).

Cut up the brie into small wedges (pic 5), enough for each potato, about five minutes from the potatoes being done. Then, take them out of the oven, top with brie (pic 7), and put back in the oven for 5 more minutes, until the brie melts all over the smashed potato (pic 8).

And then, enjoy your ridiculously rich cheesy potato!

Hey kids! So, updates on this will be at best incredibly sporadic (as I cook new stuff, and remembering to actually write up stuff). I try to be as straightforward as I can in describing my process and steps.